Video on grass fed beef – with some inaccuracies

First, here’s the video – from the Food Network: 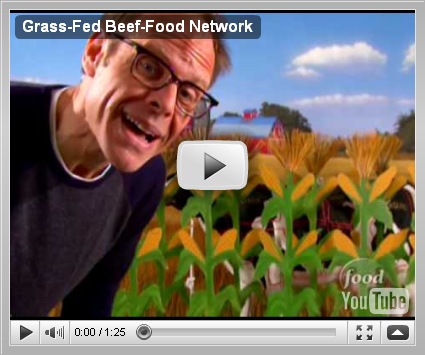 Now, he’s got this a little wrong. He’s completely right about how it has more flavor. But…

First, the art director put the cow in front of a field of wheat – which isn’t good to eat in that form either.

Second, whole corn isn’t bad for the cow – it’s got a lot of green leaves on it. Even whole corn with the cob isn’t a bad thing – they won’t get gas from it as they will if you shuck the corn off of it. But if your cows do get out, they will head straight for the corn, as it’s better than the grass and tastes like a room full of dessert. They won’t get sick, but you won’t have a corn crop left, either.

Third, it’s a dairy cow. Oops. These are usually sent for processing at the end of life, when they can’t produce a calf anymore, so won’t produce milk, either. This is where all those “downer” cow videos are made. (And that’s a dairy barn behind the cow – the silo is for feeding silage, which is usually made from ground-up whole corn stalks…)

Fourth, grass-fed beef can get higher grades than Select. These days, depending on genetics, it can be Prime or Choice. So you don’t have to settle. Belted Galloways have long been known to out-grade Angus and other breeds, even though they are a lean beef.

That’s the real problem with the USDA beef grade system – it was changed in the 70’s to reflect the corn-fed beef, so they give extra points for having a lot of fat in it – particularly the white fat which corn creates. Grass fed beef will have the healthier (and more flavorful) yellow fat – and not as much on it.

As far as toughness, I was just reviewing a University of Missouri study where they finished cattle on pasture as opposed to corn. Properly aged, there was no tenderness difference between corn and grass-finished beef.  Again, wet-aging is more common, and corn-fed beef with lots of fat will “cure” faster – so commodity agriculture tends to win out, since faster and cheaper has paid better (well, until recently).

Now the video above also mentioned that Argentinean beef is finished on grass – not so much. They learned that corn-fed was more in demand, so will actually finish some of their beef on corn (as little as a month) to get a higher profit. That month or two of corn will reverse all the healthy high CLA’s and Omega 3 oils. Just like that.

But it is an entertaining video. And the big point is that grass-fed beef naturally tastes better. Side by side, cooked the same way, grass fed beef has more flavor and is just as tender as corn-fed.

You pay more right now, because fewer people produce it and more people want it than we can raise beef to supply them. More farms are switching over to grass fed finishing every day – so see those prices start to drop over a few years.

For now – enjoy the full flavor naturally-raised beef brings to your table!

Posted by robertworstell at 8:23 PM