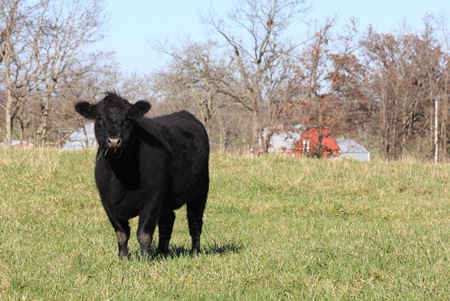 Biggest worry for a grass fed cattle-farmer is running out of hay in winter.

Now, I've been going to seminars and whatnot all along and listening to Greg Judy and some others about how this can be done. And the detractors as well.

I’ve been forced out of necessity (some fool lit my bales on fire with leftover Roman candles) to reduce my hay-feeding season to Dec-Mar. We used to run this from Nov 15th to April 15th. However, I’ve found that it’s just as easy to let them in later and then get them out earlier. We generally have used one pasture for winter grazing and then bring them back into it in summer for a month or so.

And our earlier idea of “managed grazing” using conventional practices, was to simply move them when they ran out of grass. So a larger pasture would last several months.

My changes have been to take the hay ground and turn it into rotated pasture. As the grass grows longer, I can keep them in smaller and smaller paddocks. So I get some real rank growth in some areas by late summer.

Now, the jury is still out on this. Mainly because I’m running into mineral deficiencies, which have contributed to eye infections for the last three years, regardless of bull or dam or pasture they were in – even isolated bunches caught it. Iodine in the minerals is the only real handle for this. This meant I was making weekly trips to the vet trying to catch my calves early and get them treated. Some would make three trips in a month – but this was on top of moving fence every day.

Because I had to be able to load these animals, the farther pastures didn’t get hit up until later – and the nearer ones got over-grazed. So I dropped back to conventional grazing on one of my larger (and way overgrown) pastures so I could catch up with other chores on the farm (and give my over-grazed pastures some rest.)

The trick is in constantly thinking outside the “conventional wisdom” box.

I found out this year that my alfalfa-orchard grass hay pasture was better harvested in its first cutting by the cattle themselves. What this did was to fertilize it all while they got fed. Usually that first cutting is way too rank and the weather in this area is too wet to put up any really good hay. I paid extra last year to get it "tetted” and decided that was too expensive. So the cows took the first and third cutting this year, I took the second.

But even that was more expensive than I could buy hay for. Even on shares (where I was giving up 50% of it), the cost was higher than I could buy it for. And that neighbor’s prices went up this year – so guess what: he ran himself out of business and I’m getting it delivered next year.

Meanwhile, I’ve been utilizing my rotational grazing and managed to stockpile a few areas despite the cows’ encouragement. So this winter should be an interesting mix.

Last winter, I got rid of some two-year old hay (some of it was 3-years old) by putting it out in my worst-eroded areas with no bale ring. Boy did that make some lush growth! Not right off, but later in summer it was near twice the size of surrounding grass. Figure to do the same this year, just put it in between and use bale rings to make my hay last longer. Meanwhile, the cows were also grazing off the fall growth of orchardgrass/alfalfa – de-thatching and fertilizing.

This winter changes also as I have a corn crop right next to that winter pasture, so they’ll be into that by November (weaning in late October). This will set me up to have them on hay by early/mid December, which is when our worst snow-ice shows up.

Then out by mid-March – which cuts down hay-feeding to 3 months out of the year.

We’ll see how this system works, as I’ll then be able to cut down further and get to only having to feed hay a couple weeks at most. Which makes buying hay even cheaper. (Our 25 cow-calf pairs usually only burn through 2.5 bales a week.)

The other advantage with this system is that my bales are out on the pastures before it turns cold. This means I don’t have to move bales at all during the winter and the tractor stays in the shed (mostly). The manure is then put on the pastures where it can be utilized. So I don’t have any clean-up job in the spring and hills of manure to cope with.

Sure, it’s all in the fine-tuning, but that’s what keeps farming interesting…

Posted by robertworstell at 7:44 PM