Get Toxic Cleaners out of your Farm Shop

How a Farmer Gets By Without Toxic Shop Chemicals

Practically, I don't know how anyone could get by without killing themselves off from fumes. I was in the shop today, and was marvelling again at how much I can get from my 5 gallon bucket of Basic H Classic. Every farmer should have one out there. 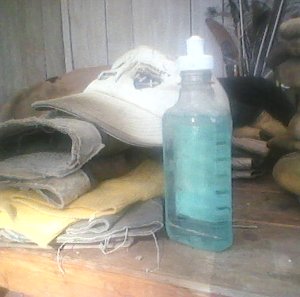 First, I wanted to mix up some bug spray to keep the mosquitoes off me. That's an easy one (and a friend recently tested this for me while mowing his lawn - not a single bite):

Half water, half Basic H (put the water in first, or you'll have foam all over the place.

I pick up other people's trash all the time and like to re-use (recycle) it when I can. Occasionally, I find old plastic fifth's tossed out. Those hip flasks. When they are plastic, you can take a pop-top screw-on lid and you can then squeeze a squirt out, rub it on.

I work with oil and grease every day, it seems. So when I get it on my hands, it usually sinks in and is hard to get off. Usually, I have to do a two-step process to get it off, first some sort of cleanser, and then soap and water to get the cleanser off. In both cases, I'm left with something that makes my food smell different when my hand gets near my mouth and nose.I don't need another adventure when I come in for lunch.

Solution is the same bottle and mix. Just put it on before you start to work and rub it in good, let it dry. Then you simply put your hands under running water to get rid of it.

A note here: it only takes a drop in your pet water to act as a de-wormer, so don't wash your hands over something they use to drink out of - they won't use it. Wash it over some patch of lawn you can mow. The grass will soak it up and love it - but I have that problem right now with that spot of grass much taller than everything else as it's gotten the run off from my "experiments" but I can't mow right there. (Have to clip it by hand - or maybe pull out that clump and feed it to the cattle, then replace with gravel and rock. Add it to my "To-Do" list - [sigh].)

Here's another note: if you accidentally leave the pop-top open, it's only going to clean your truck seat and jeans, not dissolve them.

A Natural Degreaser without Fumes. 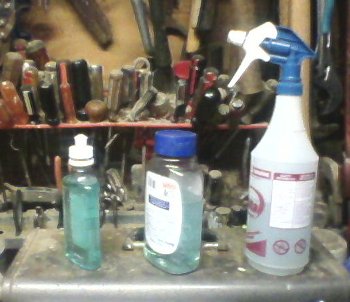 I use the Cattle Spray formula, which is a bit thinner. 1 part Basic H to 6 parts water. That's thicker than they recommend for just degreasing, but easier to remember. (And I'm still old school with habits like: use a lot to fix something better.)

This one I put in a spray bottle - and mark it so no one else will pick it up. (I've already had that happen.) What's great about this is that it isn't some aerosol, and you don't mind if it gets tipped over or leaks on something. It's not going to take paint or skin or lung tissue out when you use it. So you can use it more often.

The spray bottle is adjustable for a mist or a direct, focused stream about 5-6 ft. away. I went and bought one of these, as the old ones were in use or worn out.

I've even found that it does pretty well on sticky bolts or  hinges as a temporary fix. It's a bit of a lubricant as well. Since it's all natural, it will simply wash off. So it's a great degreaser, since you don't have to be concerned too much about where all that oil is going to as you do rinse it. And I've used it on projects where I didn't want to put the various gaskets at risk by putting a toxic solvent on them.

You should see my tractor oil radiator. Never could get it clean before this, mostly because I didn't trust being able to get those commercial degreasers completely off with just water. This just sprayed on, left it for a bit (did the other side of the tractor) then came back and washed it off with a garden hose. I'll post a picture when I can (camera-phone ran out of juice at the wrong moment.)

That bottle in the middle is a honey jar (empty when I started) as it squeezes out well for bigger messes, and is easy to pick up and hold with a gloved hand.

Which brings up the other use - taking it out with me to put on a cow's head (right around the horns where they like to be scratched, even the polled ones - and that honey-jar size ensures I won't run out easily.

Well, there are a lot. Today, I took that flask (as it was in my pocket - nice size and shape, eh?) and put some on my dog where I know she couldn't lick it. I felt a tick around her ear and she didn't want me to mess with it. This stuff is also great as tick repellant and flea dip/shampoo. As well, the dogs don't mind it, as it doesn't have a perceptible smell to humans.

She's had some fleas at the beginning of winter, but didn't want me picking them off, so I just sprayed a house version of degreaser on it (2 ounces Basic H per gallon of water - divide by 8 to fit into a 16 oz. spray bottle) on her stomach and she seemed to like it. And they didn't bother her again.

For ag uses, I've got a lot more listed on my Worstell Farms site, under Agriculture News & Information. It's good as a soil conditioner, which is what I bought it for (one quart Basic H per 50 gallons water) and some even use it to both pre-treat seeds and also to fatten stock on feed. (But Shaklee doesn't test on animals, so your mileage is your own. But there have been some university studies conducted some years ago with Basic H.)

More information about Basic H is available as linked below: ﻿

Posted by robertworstell at 8:14 PM