Why our Missouri prime beef is striped... 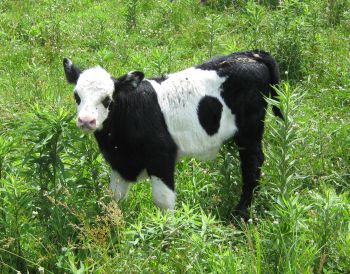 Black Angus is predominant in the commodity-driven prime beef Missouri production. While this breed was originally a British/Scottish breed, it's "Americanization" has produced a large-frame cattle with various traits that mostly have to do with fattening quickly on a corn-based diet after they are weaned. This commodity approach with its feedlot base is unfortunately responsible for most of the bad press that beef has gotten in the last quarter-century.

We have been working for the last several years to move to grass-finished beef. So we looked around for the different breeds which did best on just grass. In the middle of this, we found that a medium-framed animal was more efficient in turning forage (grasses, clover, etc.) into muscle. As well, smaller-sized animals fit into people's freezers and budgets better.

The Galloway is a Scottish breed, raised to survive on just about anything it can find during those long, harsh Scottish winters. Very similar to the Highland, except they are polled (no horns). The more commonly found version of this is belted, meaning it has a white belt in it's middle. This is from their being crossed with the "Dutch Belted" breed some generations back. They are known as "Belties".

As we found a local breeder of these, I got a bull a few years ago and started him with our all black Angus/mixed-breed cattle when he got old enough. This has produced a routinely belted Angus cross which has a medium-large frame and the ability to eat more and better. Our bull is registered, both parents being prize-winning show animals. His name is "Gene Autry". (But he mostly answers to Gene, or so I like to think.)

The patterns aren't exact. The one you see here (with the polka-dot) had a mother with a white face. He's called "Panda". Ugly by the Belted Galloway show standards - beautiful to us and his momma.

Galloways are also known for their quality lean beef. They put on a thicker hair coat in winter instead of extra backfat. This means that they also are known for higher CLA's and a better Omega 3 and 6 ratio - both of which are touted as being more heart healthy.

We are continuing to save back our heifers to replace our older cows and so will soon be having our own Beltie-Angus cross cows as well as the solid black and a few black-white-faced momma's.

All this to ensure we can raise the finest beef possible for our local customers, all locally processed and source-verified.

Just so you can eat better, even though it means our beef is striped.

Posted by robertworstell at 5:00 PM