The Origins of Corn Fed Beef Started With Leftover Ammunition

How Corn-fed Beef Got its Big Start

Here’s the dollars and sense on corn fed beef: it’s apparently cheaper and faster, resulting in cheaper beef for the consumer and more income for the farmer.


Ranchers began to replace [the Texas Longhorn] with the Shorthorn, the Angus, or the Hereford. But even as breeds of cattle changed and the rangelands grew more poor, up until the Second World War almost all the beef consumed in America came from animals fattened on grass. There was only a small trade in corn-fed beef in the U.S., primarily directed at the luxury hotel trade.
Then came Tojo.

The Japanese attack on Pearl Harbor blew our old economy away, and the whole American nation threw itself into the war effort. We built huge factories to make high explosives from ammonium nitrate. Following the war's end, these ammunition plants were rendered redundant by peace and converted to make high nitrogen fertilizers. These chemicals were applied to grain crops across the mid-west, yielding dramatic harvests especially in corn.

Back on the farm, the high nitrogen fertilizers applied to the corn fields burned up the micro-organisms that had contributed to soil health and made grain farmers dependent upon chemical inputs for their fertility.”

This is slanted to Hades and back, but an interesting quote overall.
Now, from the grain-feeding farmer's view, some on-paper statistics...


from: Why we feed grain:

“Many folks within our own industry do not truly understand why we feed grain to feedlot cattle. Many cattlemen believe grain is fed to enhance the flavor of beef. Not true. Grain is fed to decrease the cost of gain. Grain contains much more energy than forages.

As a crude example, feed conversions on grain run about 7.5:1. At a current cost of about $80/ton, the feed cost of gain would be about 30 cents/lb. (this excludes interest, vet expense, etc.). If we fed hay, the conversion would be more on the order of about 20:1. At $60/ton, the cost of gain on paper would be twice as much (about 60 cents/lb.). In reality, it would be even higher than that.

The reason is the cattle on grain would gain roughly 3 lbs./day. The cattle on hay, no more than 1 lb./day. In essence, it would take three times as long, and thus we would have three times as much interest and yardage expense (as well as more exposure for death loss).

This brings us to the fallacy that some people tell us we should ‘grass fatten’ our cattle. On good quality grass, cattle can gain from 1.25 to 1.75 lbs./day – but only for about five months out of the year (during the growing season). During winter in most areas, those cattle would stand still or even lose weight. Instead of 150 days in the feedlot on a grain diet, grass fattening would take two to three years.
It also means we would have to cut down on the cow herd, to make room for the slaughter cattle that are usually hauled off as calves or yearlings. The bottom line is that if we went to ‘grass fattening’ we would only be able to produce 30 to 40% as much beef as we do today.”

The key point here is whether it is still cheaper to raise cattle for two years on grass, or farm with chemical fertilizers (and mechanical, fuel inputs) and then feed corn to feedlot cattle which are ready 8 months earlier. Means you have income every year from that year’s cattle, not a continuing investment – the longer the runway, the more chances that the plane doesn’t take off. Cattle are ready in as little as 16 months, meaning you are moving them off once weaned and have a payment in 1 1/2 years or less. Your next crop is ready for weaning and fattening just as you finish cleaning up the stockyard manure from the earlier bunch. February calves, fall weaning, sell fat cattle at the height of the June market. Simple.

The grass-fed beef farmer keeps his steers for fattening, selling off any non-replacement heifers as yearlings. What the figure-out above doesn't take into account is Mob Grazing, which has in all instances increased herd size, sometimes by as much as 4X. Also, his on-paper figure-out doesn't take into account using genetics which fatten well on grass (something mostly bred out of the American feedlot Angus).


A Strategy for a Profitable Grass-Fed Beef Operation 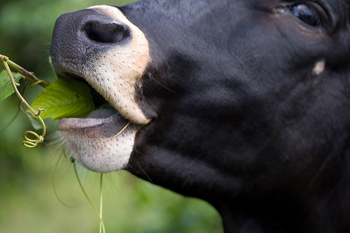 If you were to raise only grass-fed beef, the probable strategy would be to geld the bulls into steers and release them back into the herd, once weaned. Take the heifers and sell them either as feeders or as yearling heifers for breeding by others. Means you’d be keeping half your progeny on your pastures.

Maturity is 20-22 months on average for grass-fed beef.

This approach has you birthing in April/May and selling yearling heifers off by June market highs. Grass-fattened cattle are ready the following year - either by auction at the June high, or (preferably) direct to the client.

Question is how much your crop land would generate in terms of pasture compared to farming it for corn and beans.

I've done the math on this, and raising crops is more profitable year-to-year on paper, even on our marginal land. However, you can't scale crops or add value readily - and if there's too much rain or not enough, you've got a crop failure and no income to pay those expenses off. And it's your time as well.

Meanwhile, the same land in grass would produce less or more, but it would still produce. Too many cattle for the grass and you weed out your worst stock, to sell at auction. But you still have a crop every single year. However, if you are able to direct-market your beef, you take out all the middlemen pricing as well. So you can get premiums for your beef this way - something you can't do with commodity grain.
And that is why we are moving more and more over to grass-fed beef and livestock in general. We can control the market better and get 4X the profit with much less work and inputs.


A story of profits

Let me tell you an actual scene I ran into. At this point, we were still selling our steers and heifers off as yearlings. We were making about $600 per head, still cutting and baling our own hay - which was really our only expense.

We went down to a farm tour where one of the presentations was on how they would fatten their cattle up locally and then ship them to Iowa for final finishing and were quite proud of making $60 profit per head.

Oops. We kept our mouth shut on that one - at least until we could get to the truck where no one could hear us.

So in mineral-rich Iowa, it might still make sense to fatten beef on corn, down in Missouri we will cry all the way to the bank that our land just doesn't produce enough corn to be able to afford anything but high-quality grass-fed beef sold to our own neighbors just the way they like it.

Posted by robertworstell at 5:06 PM