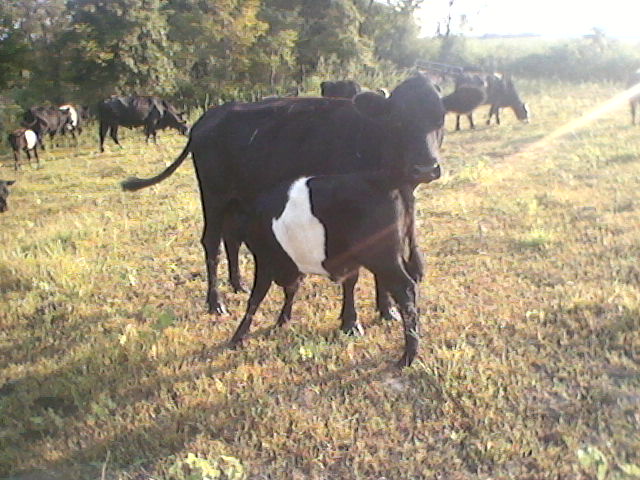 Got this newsletter from Kit Pharo, which sums up some choices we made in a bull (not one of his) a couple of years ago:

Because smaller cows can wean a higher percentage of their own body weight than bigger cows, they will always produce MORE TOTAL POUNDS on the EXACT SAME INPUTS.   I have NEVER EVER found a commercial ranch situation where bigger cows were more profitable than smaller cows."

We went with a Belted Galloway and that turned out to drop our average steer weights from about 900-1000 lbs down to around 700. Of course, with the prices going up, we were able to keep our prices the same and we were still at auction levels. It didn't please some regulars who got a lot less this year, but when I showed them the numbers, they were still grateful to get that quality.

It does mean that we will be getting a scale to ensure we are running fair to everyone.

Even with the drought this year, we haven't been running shy on grass. It's mid August now and I've still got another couple of pastures to get through the first time before I start heading back through some of the others.

So we'll be able to actually put more head on (save back more heifers) once the weather evens out. These will be mixed Galloway-Angus, so will be a smaller frame.

However, the advantage of Galloway is that they eat a wider variety of forage - and so have tended to teach my older Angus a few things about what they used to simply leave as "weeds".  We mostly graze from one side of the paddock to the other now, instead of from "dessert to spinach" as is common.

And our beeves are much more mild-tempered, another factor of Galloways. (Had to herd some of my neighbor's all-black Angus steers today - and was reminded of how much I was missing in anxious running to corral them.)

With a 700lb beef, you are getting around 70lbs. in the freezer. And this is more doable for most people. So I think we are winning all the way around.

If I could get the conventional system to quit raising beef prices in general, my customers would be happier, but to get beef at wholesale prices is still a big bargain, regardless.

And that's what we're here for - to help people improve their quality of life.

Posted by robertworstell at 3:26 PM