What's Safe, Healthy, Cheap, Green, and Runs on Grass to Grow Your Meat? 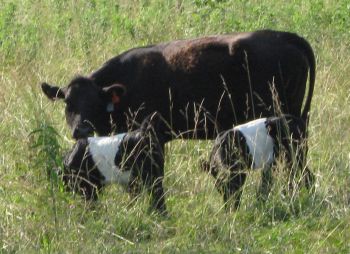 The reasons we raise grass fed beef are few. And they boil down to simply these four.
It's our opinion - based on our experience - that Missouri grass fed beef is the best solution for all of these points.

In any supermarket, you can't tell that two steaks laying next to each other actually came from the same beef carcass. Unless you see that carcass actually cut into its pieces, you won't know what animal it came from. But even then, you won't know how that cow was raised or what it was fed. And you don't know how it was processed into that meat you are buying.
This is exactly how all these infectious diseases get circulated. People trust that corporations, inspected by governments, actually know and do best for everyone. Neither corporations or governments do their jobs perfectly. Some short-cuts get taken here and there. They aren't caught and traced until someone gets sick.
And that system works only as long as everyone follows the rules. But it's not a perfect system.
Last time I followed the government tracing down a contagion which escaped, it traced to hamburger which was mixed together from 4 states and 3 countries. Somewhere, along the line, a processor goofed, short cut, cheated. And the result was that an untraceable infection was let loose into hamburger and widely distributed.
The result was that a few people died, a lot of people got sick. One person wound up paralyzed for life. Her mother cooked her up a hamburger from meat bought at the same local supermarket in their neighborhood.
With locally-raised Missouri grassfed beef, purchased from a farmer  you know, processed at a local abbatoir that you can visit - then and only then will you know that your beef is safe to eat. Only then. 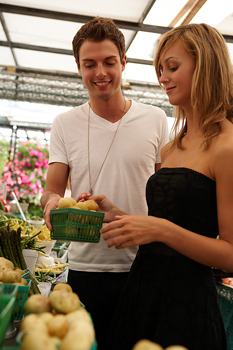 When cows are fed anything but grass, they change. Diet determines the quality of the animal as it grows. What they are fed influences the muscle fibers. When they are fed corn grain, then extra fat is added to their system. Grain doesn't digest well, so the acid-indigestion is offset with other food additives. This is a solution that becomes another problem. Often this is where anti-biotics come in.
The overall situation is that the more they "add" to a cow's diet in order to make the production smoother, cheaper, or faster - those additives have an effect on the meat. Many of them stay in the fatty, intramuscular tissues. So what they feed cattle is what you eat, after a fashion.
That said, cows can and do eat a wide variety of forages in their natural state. They have four stomachs, which allows them to thoroughly digest growing material in order to extract all the nourishment they need. This one biological fact also allows them to digest all sorts of non-natural diet materials and not only survive, but continue to gain weight.
When you eat meat harvested from Missouri grass-fed animals, eating only natural forages, you get the benefit of lean and natural beef. It is said that where a person could make their diet only on this, they would actually get all the necessary proteins, minerals, and vitamins they need. Some have, in fact. While we suggest that you continue salads, breads, fruits, and milk products (avoids boring "same-old's" situations), one should take that into account.
A healthy diet would start with healthy foods, though. And grass fed beef is healthier than many, if not all feedlot-produced meats. 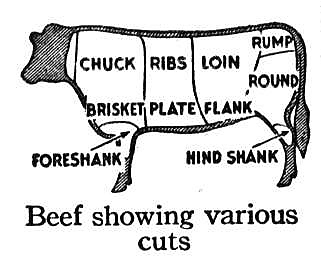 Buying a Missouri beef by the quarter takes out tons of middlemen - literally. A beef raised by a farmer, and sent to a processor, then delivered to you, has no real middlemen. You pay the processing fee and the farmer's growing costs.
What you don't pay is having it trucked all across the country to go to different specialty plants which kill, part, and wrap the meat. Then it winds up in a supermarket. That's at least two more layers of workers which have to be paid, along with all those trucks, plants, warehouses, and stores.
Now some object to the cost of hamburger when you buy it direct from the farmer. But they often don't see that the various steaks, roasts, and other cuts are also the exact same price. Supermarkets charge much more for choice cuts. If you actually price the separate cuts by name, you'll find that a quarter-beef costs you 3/4's less than the same pounds of cuts bought separately.
The bargains are in buying direct and buying in bulk. Value you can't arrange from your local big-box supermarket. 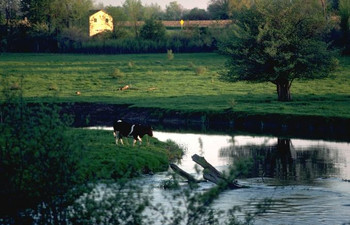 While it's quite a buzz-word, growing "green" products is hard for many industries. There are all sorts of arguments about whether feed-lot beef or pasture-finished beef are more environmentally "friendly".
For us, the argument was solved when we found out that it was less expensive and just as productive to raise cattle using all-natural methods. Our cattle eat natural forages all their lives. If they need medicine to cure an illness, the vet gives it to them. But because they live healthier lives in natural surroundings, our vet bills have become less and less. Not all that surprising.
When our cattle eat corn, it's the whole plant when it's growing and green. (Did you know that corn is a grass?) But they mostly eat a huge variety of grasses and forbs and clovers, plus others. (For instance, they like to eat tree leaves, as it is a natural wormer.)
By keeping cows on pasture 24/7/365, you actually take nearly nothing away when you process that animal into meat. Well over 90% of what the cow eats returns right into the soil, in a manner which helps that soil raise even more grass than before. Feedlots have trouble with the manure. Our Missouri cattle put that manure right back where it would do the most good. It's natural fertilizer, after all. And so our pastures are constantly improving. We don't have to spray them or fertilize them - ever.
So any argument that we have to use carbon-based fuel for anything other than moving that cow to the processor is moot. Our cattle are born here, raised here, and the lucky few old cows are buried here. Everything else - you get. Meanwhile, they consume no fossil fuels, but help the land sequester more "greenhouse gases" than they create with their digestion. Tell me a feedlot can make those claims.

When you next have a chance to go to a commodity or big-box supermarket. Ask the manager or stock-person where that meat came from - and if those two steaks sitting side by side actually came from the same animal. And who processes that cow into meat. You'll find they don't actually know.
But now you know that your best pocketbook/wallet value, your best red meat raised in the "greenest" fashion, and perhaps the healthiest protein is also the safest. If you know your farmer, know your processor, and buy Missouri grass fed beef by the quarter.
And if you want to see how the safest, healthiest, cheapest, and greenest Missouri grassfed beef is raised - just come visit our farm. We'll answer all your questions and show you around. And you can reserve your next order at the same time.

Posted by robertworstell at 5:24 PM