How to Convert Your Farm to Mob Grazing from Conventional 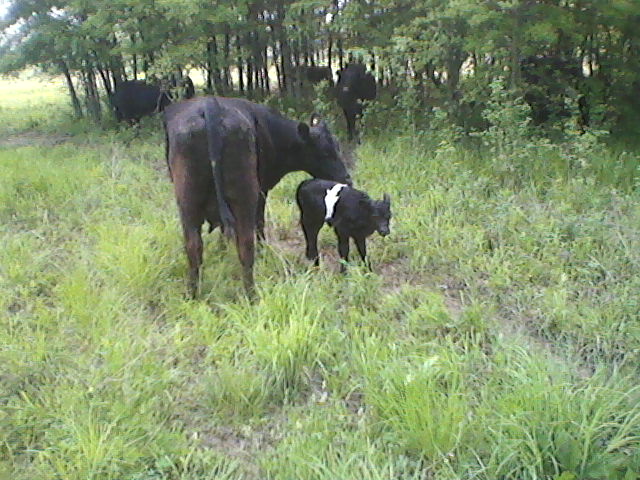 When you mob stock your grass fed beef cattle, they convert natural grasses, legumes, and forbs (plus everything else they can eat) into fertilizer – some of the best stuff you can put on a field. We call them four-legged self-reproducing combines with on-site storage. They take whatever is out there and turn it into meat, plus produce another of themselves every year. Since they last about 12-14 years, they will produce on average about 10 of themselves, which is a nice profit for a farmer.

Now Greg Judy doesn’t tell you one interesting fact about where he farms: if we didn’t farm this particular area of country and it wouldn’t turn to desert. In fact, our particular part of Missouri would turn into rather thick woods within about 40 – 100 years. And it would over-populate with deer along with other wildlife (like feral pigs), with cougars and various large predators making a comeback. (That's if some developer doesn't get a hold of it and cover it with concrete, gravel, trailer parks, "ranch" homes, and lots of water, sewer, and electrical connections.)

Of course (unless there's a city to commute to jobs) no humans would be around, because there’s no money in it – no real way to make a living. Trees grow too slowly, and our government doesn’t like us hunting and logging for a living. Now, there are some radical activists who would love that concept – but they are basically suicidal, anyway. (I took a college course on Geography a few years ago and discovered that this exact point is being taught in their government-approved textbooks. "Humans are basically at fault for everything, particularly the white male minorities" – so much for their touted diversity and tolerance campaigns.)

Back to the real world.

Now, most people in my “neck of the woods” are into high-overhead row crops. Those farmers that raise cattle on land they can’t “farm” use conventional grazing, which is leaving cattle on a fenced-in section until they mostly eat everything down. Then you move them over to another section and repeat. In July or August, you sell off what won’t make it through the “slump” where it’s too hot and dry to raise grass. Meanwhile, you save a couple of spots to make hay out of – which keeps that tiny herd through the winter. And you again sell off in the fall (at reduced prices) everything you can’t feed.

The weird part is that cows were meant to graze all year round. Even through snow. And mob stocking will set the land up to produce enough to make that happen. It’s just your management has to change.

Now, I’m no expert, but I have a tendency to write too much, so I’m writing about our own farming efforts so others can use what they can out of them.

1. Get out every day for some excuse and move some fences. Actually walk out in and around your cattle regardless of the weather. This gets them used to you. And you’ll get more familiar with the individual cattle and how they are doing. You’ll probably go through more pairs of boots, but it’s cheaper than fuel and engine parts.

2. Study up on Managed Grazing. This is the step that both Salatin and Judy did when they eventually moved to Allan Savory’s methods of ultra-high-density stocking.

3. Start laying some temporary electric lines out with battery-powered chargers,
subdividing your existing pastures so that cattle just have enough to eat for a couple of days in every small part. You’ll probably want to start with a small herd in a back pasture. We have some heifers and steers we keep back until they’re ready to meet the bull or the processor, so they are a good experiment. Take a nice pasture that already has a water supply available and a good perimeter fence.

(We stumbled onto an interesting idea of creating pie slices and moving the two long sides of it. This is until we can install a nice electric line inside that perimeter fence to power it. Put your charger at the point with some ground rods so you don’t have to move the charger every day. Sounds simple, but I’m writing it down here so you don’t have to figure it out – you’ve already got tons to figure out. This is just to get you started. [Update: We now start at an existing barbed wire perimeter fence and use that as the ground, doing a half-pie at a time.])

4. Start buying hay with the money you’d spend on fertilizer, fuel, and equipment for hay. It should buy you the same amount or more. Quit growing your own. Import other people’s grass onto your farm and use it to fertilize your own fields.  Now, I’ve been starting to lay out the hay on the bad spots (over-farmed) spots in my fields (even gullies) so the cattle eat and manure right there. In those spots by two years’ time you have a very thick growth coming on where nothing much did before. (Of course, if they don’t eat it down, it’s hard to disk, but we’re really moving back to permanent pastures everywhere, anyway, aren’t we?) But put those hay bales out where they’d do some good – not just in a feed lot where you are having to move it back out to the pastures again. Takes some foresight – but you’ll use your tractor a lot less during the winter as you do.

6. Study the temporary layouts you are using. Cattle need three things – water, grass, and shelter. They actually like trees better than barns or sheds. So the best layout for a pasture is a savanna, where there are these huge shade trees popping up every 50 feet or so on a grid. You see, grass likes partial shade and cows keep eating in the shade. (One tip I heard was to trim off the lower limbs as high as you can – this keeps the shade moving, so the cows don’t just "drop everything" under the trees. You still need a lot of trees to pull that concept off – but that's another article, another time.) In “Grass-Fed Cattle”, Julius Ruechel says that you can take your whole farm and simply rotate the cattle through it as you go. Our own farm is dotted with ponds, strips of woods, and waterways that are full in the spring, so this is a no-brainer. [Update: Severe wind needs real wind-breaks, though. Even two standing walls with the point against prevailing storm winds (North-west for us.) will help. Some have used a semi-circle of hay bales as well.]

7. Study where you are putting fences – if you keep putting them in the same spot, maybe you should put a permanent fence up there. We use steel t-bar posts for corners and just leave them there with the insulators on (so we can find them later) and this tells us where we are coming back to all the time.

8. This brings up another point – use what you got to start with. There’s a lot of great fiberglass poles out there and fancy-dancy geared wind-up reels. We use reels for power cords and our old rebar poles with plastic insulators on them. (If you can’t shove them in with a heavy leather glove on your hand, you can carry a hammer on your belt for frozen or summer-hardened ground.) Invest in better gear when your cows start bringing you more profit from the lower overhead. Or not. Question: does it improve your efficiency enough to afford the investment?

These are just the transitioning steps. Find and read everything you possibly can about the subject. Clip articles and put them in binders so you can re-read them. Buy books and dog-ear the good parts. Keep all this stuff by your easy chair so you can read when you come in to cool off or to warm up. Attend extension meetings and ask for these subjects to be brought up when they only want to talk about machine shops, grain storage, and crop prices.

And talk to your neighbors when you can. Compare notes.

This stuff can be done. And you can make a nice five-figure income which pays all your costs every year, as well as taxes and some nice retirement CD’s. The alternative is going broke and watching the trees take over. Still pretty, but not as exciting as raising cattle and getting all that good exercise plus lots of great beef in your diet.

Posted by robertworstell at 7:06 PM