The essential economics of Natural Farming with grass fed beef are simply how to lower costs and raise profits by:
The point is that the more naturally the animals are raised, the healthier their meat is. They cost less to raise, as well. Meaning the better-for-you products come from farms where only natural farming methods are used - and these people are more sustainable than other models. (I have more pages on this site which deal with this in greater detail.)

I had this long list of PDF’s to give you and included the links to them as I found them on Google and updated them later by hand to make sure they work. If you want an updated list, see the end of this post for the exact words to type into Google to get the same results (and links you can actually use.)
PDF mob grazing references: 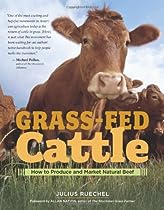 Mob grazing gets the most out of forage

CHAD Peterson sent his first mob- grazed cattle to the feedlot last … Mob grazing acclimated them to close eating quarters like they face in the feedlot. …
magissues.farmprogress.com/AMA/AM05May09/ama036.pdf

GREG and Jan Judy say mob grazing has nearly zeroed their input costs. For example, they once spent $5000 per year frost-seeding and reseeding clover. Now …
magissues.farmprogress.com/MDS/MS08Aug09/mds043.pdf

GRAZIER Greg Judy believes a technique called “mob grazing” is better for … He has been using the mob concept, also known as high-intensity grazing, …
magissues.farmprogress.com/MOR/MR06Jun07/mor014.pdf

king or mob grazing during the forages’ dormant season. Animal performance may be sacrificed, however, with mob grazing. Stands seeded to weeping lovegrass …
magissues.farmprogress.com/TFS/FS09Sep09/tfs007.pdf

Keep learning; apply what you learn

“mob” grazing techniques, has found bison will not tolerate quite as much crowding as cattle. Historical reports say bison grazed by the hundreds of …
magissues.farmprogress.com/AMA/AM05May09/ama039.pdf

Using what he often calls “mob” grazing, or high-stock-density grazing,. Judy estimates he’s only taking about. 30% of the forage from each paddock …
magissues.farmprogress.com/wfs/WS08Aug09/wfs046.pdf

in mob grazing is that it is less forgiving to the bottom enders. In a smaller herd, lower performance animals don’t get. As the plant matures, …
www.acresusa.com/toolbox/reprints/May08_Salatin.pdf

did not go into brain-shutdown mode. Their incredible experiences with. “mob grazing” is shared on pages 4 and 5. Folks, this is BIG! …
www.pharocattle.com/May_June_2007.pdf

MFSI’s Return to Your Roots Newsletter Mob Grazing proves to …

Two studies were conducted using the mob-grazing technique to … “Mob-grazing” with a high stocking density on limited land area for a short period of …
www.tropicalgrasslands.asn.au/…/Vol_21_03_87_pp123_132.pdf

Now, if you want to search for this yourself in Google, type in “mob grazing filetype:PDF” and it will give you all sorts of PDF files.

So have fun with this!

Posted by robertworstell at 10:55 AM